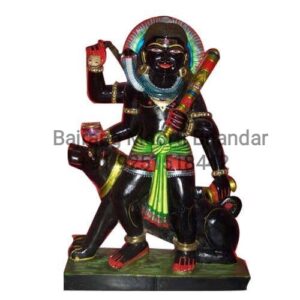 The Bajrang Moorti Bhandar deals Kal Bhairav Murti Anywhere in the world & also deals in the domestic market of INDIA & also exports Bhairav Ji  statue to the other countries like USA, CANADA , RUSSIA , NETHERLANDS, ENGLAND, AND ALL OVER THE WORLD. kaal Bhairav Baba murti is a almighty god statue. In Bajrang Moorti Bhandar we have various types Bhairav Ji statues are there in various position the mainly ones was that riding on the dog , standing in front of the dog ,etc in the statues also various postures are there of Kal Bhairav Statue , the Bhairav Ji Statue were mainly situated in the homes, temples.  If you are a Devotee of Kal Bhairav Baba you can place the order for the Statue. 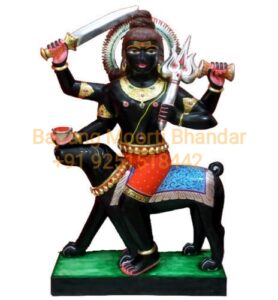 We are Known as the Manufacturer and Suppliers of Marble Kaal Bhairav Murti in all over the World. In the above kal Bhairav Baba Murti Full Gold work has been Done in the Black marble Statue. Any Devotee of Bhairav Baba can place the Order for there Statue and place it in their Home, Temples and Offices , As you can See in the Above Image of Lord Bhairab Baba Sitting on the Black Dog having four hands in one Statue Damru is there in other hand trishul is there in the third hand Big Knife( Weapon) is there and in last hand Bowl is there. We Deliver Bhairav Baba Statue in the Countries like USA , CANADA , THAILAND, BRAZIL and many of the Other Countries in the World where we Deliver our Statues. To Know more about Kal Bhairav Baba you can Visit Wikipedia.